A stalwart expands to a neighborhood in transition. 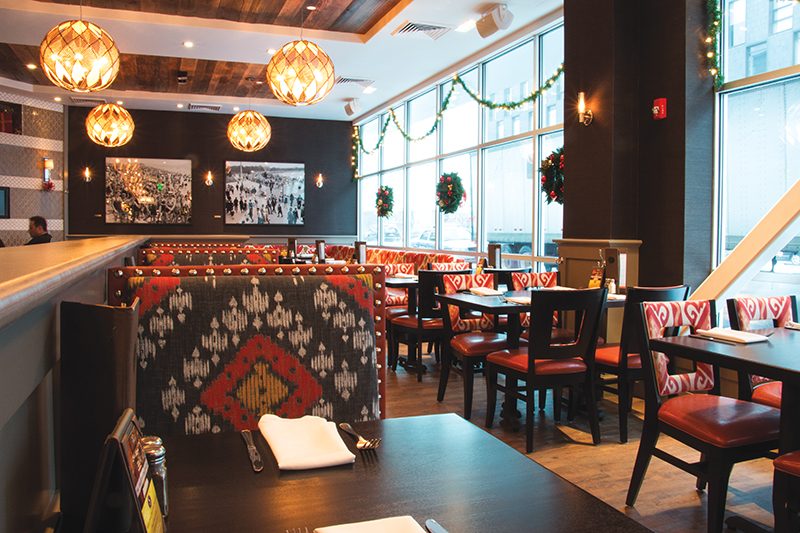 Gentrification has been creeping up on residential South Boston for years, but lately it looks to be galloping in. Suddenly, Broadway boasts hip clothing boutiques, a bagel joint, even (gasp) a Starbucks. Neighborhood dives like Aces High are giving way to cacophonous hotspots like Lincoln Tavern. Now comes Stephi’s in Southie, the second sibling of venerable tourist-and-shopper stop Stephanie’s on Newbury, settling amid new high-rise condos, pitching dishes like fancy meatloaf and simple roast chicken at near-fine-dining prices.

Odd as it sounds in 2014, upscale comfort food was a novelty when Stephanie’s debuted 20 years ago, abetted by a prime people-watching location and patrons tired of artier culinary trends. To my surprise five years ago, Stephi’s on Tremont made these qualities a success in the typically edgier South End. Can this formula, bolstered by some useful tweaks, work in the new South Boston? Steady crowds in its first months suggest so.

Longtime Stephanie’s fans will welcome greatest hits like six entree-size salads topped with hunks of lean protein. I remain baffled that more restaurants don’t offer such dishes to attract fitness-conscious diners the way Stephi’s clearly does in droves. The renditions here are genuinely tasty and satisfying, like the crunchy vegetable salad ($13) of mandolined veggies with baby arugula, not overdressed with lemon vinaigrette, topped with chicken (for an extra $3), shrimp (+$6) or tuna (+$9). The Newbury Street chicken salad ($16) is another deserving favorite, about half a pulled roast chicken, beautifully moist, atop greens and tomatoes in a mayo dressing.

Entrees include that fancy meatloaf ($18), the epitome of the format, a slab stuffed with cheddar, covered in salty mushroom gravy, flanked by butter-laden garlic mashed potatoes and butter-drenched haricots verts: the yin to a dinner salad’s yang. The giant Stephi burger ($15) is similarly over-the-top in its flavors: sweet caramelized onions, salty bacon, umami-rich mushrooms and cheddar on a sweet brioche bun, plus a fistful of good fries. Have we seen this before? Endlessly. Is it good of its kind? Very.

More ambition shows in a couple of entrees, like lamb osso bucco ($24) over mascarpone polenta. Initially nonplussed by the tiny two-shank portion, I warmed to this dish: It’s rich and fatty enough to be quite filling. Sides drench vegetables in something sweet or fatty, like roasted acorn squash ($8) with maple butter and cranberry marmalade, or the inevitable shaved Brussels sprouts ($8) larded with bacon. If you’re feeling overwhelmed, consider the slow-roasted cauliflower ($8), which goes light on aioli and garners depth from smoked paprika. Or sit at one of the two bars and order bar snacks—simple, value-priced bites like a generous dish of Marcona almonds ($4), grill-charred shishito peppers ($4) and marinated olives with ricotta salata ($4).

The bar program hews to an increasingly dated but still popular approach: sweet-leaning specialty cocktails, free-poured and served in outsized portions, like Omar’s Coming ($11): local gin, Aperol, St. Germain, lemon and a Champagne float. The wine program features a dozen respectable by-the-glass offerings ($8-$17), a couple of cheap-and-cheerful drafts ($8) and a nitrogen preservation system that enables any of 16 wines to be ordered in three-, six- or nine-ounce portions. Bottles include four sparklers ($36-$85), 22 whites ($24-$60), one rosé ($32), and 28 reds ($30-$115) with some remarkably gentle markups at the high end, like a 2009 Silver Oak Alexander Valley Cabernet Sauvignon ($95). Beers straddle the conventional/geeky divide—a pounder of PBR ($3) here, a bottle of Gritty McDuff’s Pub-Style Pale Ale ($6) there—with a bias toward local brews.

Service is young, friendly and only moderately polished. The space is fashionably loud and gleams prettily with hard-edged decor. In many respects, it’s a succinct encapsulation of what Southie’s frenzied real-estate developers are doing at this moment: taking something old, slapping a slick veneer on it, and selling it to hordes of hungry young professionals at a nice markup. The neighborhood and its restaurants have a long way to go to reach 21st-century modernity. In the meantime, Stephi’s in Southie seems neatly positioned to span the old and the new.